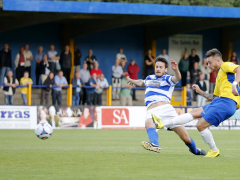 Louie Theophanous scores for the Saints 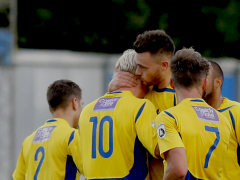 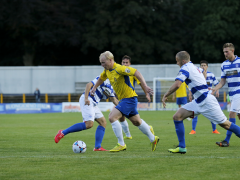 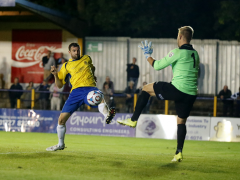 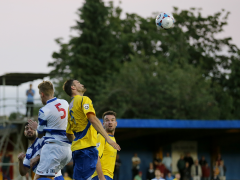 Darren Locke challenges for the ball 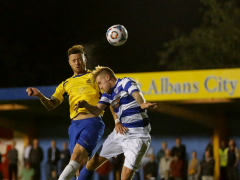 St Albans City began the home leg of their 2015/16 National League South campaign with a 3-1 defeat at the hands of Oxford City.

The Saints went into the game on the back of a 0-0 draw with Gosport Borough, while Oxford held Chelmsford City to a 2-2 draw at Marsh Lane.

Oxford, playing just their second fixture in the Vanarama National League South, began the game brightly, and quickly took control of the game, as they spread the ball around the Clarence Park pitch with ease.

The Saints could have easily found themselves behind within the opening fifteen minutes if it wasn’t for Joe Welch, and a large slice of luck. Joe Welch was called upon to palm away Picarre’s drive from the left of the box, before Oxford new boy Bradley Bubb failed to get out the way of Isaac’s follow-up. The Saints eventually managed to clear through John Kyriacou.

However, it wasn’t long until the away side took the lead. Goalkeeper Laurie Walker, having joined from Hemel Hempstead during the summer, played a long ball forward which Scott Thomas failed to clear, and it fell into the path of Bradley Bubb, who fed Isaac with an exquisite pass, and the wide man made no mistake, as he stroked the ball home.

St Albans levelled things up just two minutes later, with their first meaningful attack of the game. Lewis Hilliard cut in from the left, and he found Louie Theophanous on the edge of the box. Theophanous, making his home debut, scored his first League goal for the club as he finished with ease low to to Walker’s left.

That goal seemed to be a set back for Oxford, who failed to find their rhythm again prior to half-time, as clear cut openings became few and far between.

The Saints would have been happy to find themselves level at the break.

Theophanous, playing up top on his on own, attempted an ambitious effort from 25 yards on the 50 minute mark, but his powerful strike was straight at Walker, who despite spilling it at the first go, eventually got both hands on the ball.

Bubb, who led the line well for his new side, saw a guilt edged chance go to waste just before the hour mark when he headed Santaigo’s cross over Welch’s goal unchallenged.

The visitors took a deserved lead in the 71st minute. Joe Welch made an excellent save to deny Pond from the edge of the box, but the rebound fell kindly for Del Alamo, who executed a scissor kick which beat the City players on the line.

The Saints looked to have possibly snatched a point with two minutes left on the clock, when Theophanous got a touch of Kyriacou’s cross, which took it past the onrushing Laurie Walker. However, Santiago was in the right place at the right time, and he cleared the ball off the line.

Deep into injury time, and Justin Merritt’s side made sure of their first three points in the division, when they broke at speed following the clearance of Lee Chappell’s free-kick. Del Alamo combined with Bubb, who raced past the City defence, and slotted the ball to Welch’s left.

The Saints will have no complaints with the result, and will be hoping for better things when they host Ebbsfleet United at Clarence Park on Saturday afternoon. Kick-off is 3pm.